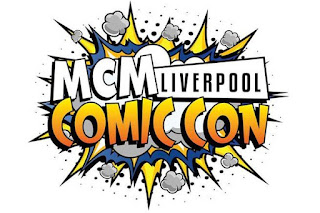 So this year, myself and my boyfriend decided we were going to make it to comic con. And I guess Comic Con read our minds as they came to us! Liverpool Exhibition Centre held comic con this year. It was great!
The Atmosphere:
Getting in was easier for us. Buying Priority Tickets (£15) was so easy. The line was fairly quick compared to General Admission which went right around the Echo Arena. There were so many people, dressed up, some ecstatic to get in. The atmosphere was brilliant. Once inside, there were people giving out free Comic Con shirts (which my boyfriend was made up about, even though they had the London symbol on). Starting at Entrance C, we made our way in. I never thought it would be this big. Particular stalls by C.E.X, Nintendo Gamers, Celebrities to our right. It was fantastic.
Costumes:
Sadly we didnt choose to dress up, as we are not the type of people who would, but some of the costumes we saw were amazing. One in-particular we saw a lot of was “Arrow” which confused us, as we thought Arrow wouldnt be that popular. Of course, with the release of Dead-pool there were quite a few! I think to gain the full experience, you have to dress up. So many people were high-fiving for wearing the same costume/being from the same theme. Even some of the staff dressed up, we saw stormtroopers and fallout boys everywhere!
Merchandise:
Personally, I didn’t see anything I liked other than the Japanese Kawaii Stalls. But Daniel (The boyfriend) decided since he didn’t turn up dressed up, he was going to buy some stuff. He started off with a watchdog lanyard, and left with every watchdog merchandise there was. The only downside to this, was to go to Comic Con you have to have a bit of extra cash on you (maybe £100? I dont know)
As there is so many things to buy, and things like swords, food was expensive, but what do people expect of course it will be! Being a good auntie I bought my niece some shopkins, and my nephew some batman posters for his wall. Sadly, I wasn’t allowed to buy a Japanese alpaca teddy, even though I would of loved one, (Asthmatic. Great) and there wasn’t much Animal Crossing merchandise either for my collection but I guess what’s there is limited by the time you’ve decided to look around.
Rating:
8/10.
Pros:
– Exciting
– Alot to buy
– Geeky Galore!
– Nice/Welcoming People.
Cons:
– Crowded
– Not many known celebrities
– Lack of things floralames likes! (:P)
– Amylou.