I don’t typically post of a Sunday, but today is a very important day. Today marks 100 years to the First World War ending. Isn’t that madness? But while we’re remembering those who died/fought for us in the great wars, we cease to remember that there have been many who fought for us before and after. And this is a homage to my dad who is a veteran.

My dad was a member of the Queen Royal Irish Hussars (now disbanded) in the 70s-80s. He joined up the minute he turned 17, and never looked back. The response? “He won’t last more than a week” but he lasted 8 years serving as a tank driver and Drill Sergeant. The stories he could tell you if you were around him amaze me. Such as his time at the Berlin Wall, where soldiers would throw cigarettes and chocolate over the wall into the Eastern quarter, or visiting the Falklands and it being completely empty! Or the places he got to travel, such as Canada for combat training, China, Germany and more!

Fun fact! My dad was inspired to join the army by the John Wayne film “The Green Berets” and he got that green beret alright! His nickname was also Cool Hand Luke!

And don’t get me wrong, it wasn’t all good memories because at the end of the day you’re preparing for war, you’re putting your life on the line for your country, and PTSD is a big thing. Imagine preparing for combat every day, 24/7. Going back into civilian life is not easy. Loud traffic, learning not to jump or react to the noises or controlling your anger/aggression. Many soldiers go through this for all of their life.

Sadly, my dad won’t be going to a march this year, due to being ill (follow his story over at Charlie Beats Cancer), but I just wanted to do a little blog post to show how much of a true hero he is to me. He saw things, he would never wish on me, and I know I wasn’t born back then, but hearing his stories, just makes me feel like everyday he was fighting for me personally. He has always been a huge inspiration in my life (as has my mum of course), and always taught me my history/military history, which I think is vital as we pass this 100 years. Just think, in 200 years will we still be laying the poppy wreaths? Will our children’s children be aware of what our ancestors went through during the Great Wars, Vietnam, The Falklands War, Afghanistan in the 90s? Or even yet, the Syrian Civil War which is highly impacting us all right now?


All I can really say is. Teach your children around you. Show them documentaries, show them stories like the ones above. Even if they’re not interested, make them aware. Find out if you have a family member involved in the wars, or still in the Army and tell them their story!

And least we forget, we will remember them.

At 11am today, please do a minute silence. 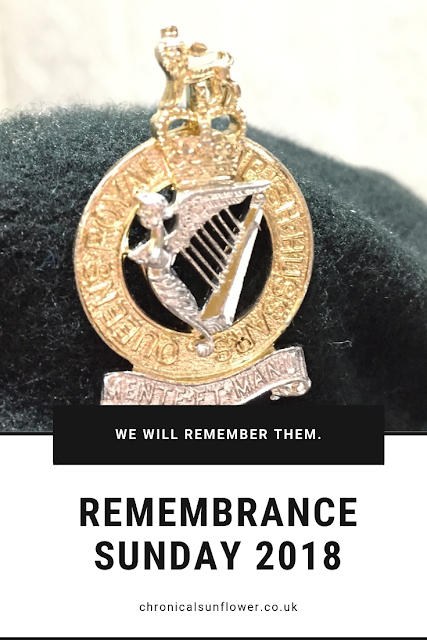