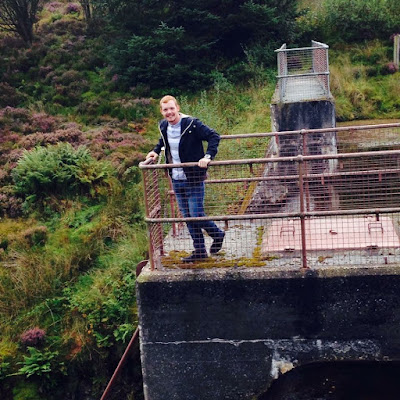 Yes I’m running out of blog post ideas, but this typically happens around preparing for Blogmas! I came across this tag, through a blogger called What Lauren Loves, and thought it would be super interesting!
How does it work? Basically instead of me answering these sort of questions, my boyfriend will be! I don’t really talk about our relationship in blogs, and if I do, I use his gaming tag, rather than his actual name. He’s never told me to not use his name, but I feel it’s better to use “Hender” as that’s what most know him as!
1. Where did we meet?
In Army Cadets.
Correct – Over 7 years ago!
2. Where was our first date?
In my house and we watched a film called Snails.
The film was called Turbo, but he’s right.
3. What was your first impression of me?
Nervous and cute.
Awww, yeah I was so nervous, we both sat on opposite ends of the couch like “…oh…”
4. When did you meet my family?
A few weeks after we got together.
Actually you met them a week after you asked me to be your girlfriend. That’s how much I knew you were my soulmate, but I never told you that…

5. Do i have any weird obsessions? If so, what…
Yeah, obsession with stationery, yellow stuff…and oh Sox.
Correct.

Personally I said our traditions are spending Christmas with my family, and Boxing Day with his, but apparently it’s not a tradition!

8. Where was our first holiday?
Ireland.
Correct.
9. What was the first thing you noticed about me?
How small you were.
I am quite small. I’ve been 5’0 since I was about 11 (now nearly 21).
10. What is my favourite restaurant?
McDonalds probably.
Personally thought it was the Golden Castle or City Buffett (both Chinese) but okay love! I’m not angry at a mcdonalds though.
11. What do we argue about the most?
We only argue over small things when we’re hungry or tired, so it can be anything, but we make up 10 minutes later.
Very true. I can’t remember the last time we argued and didn’t end up laughing or going about our day.

12. Who wears the trousers in the relationship?
Obviously me…Or I atleast try to/pretend to.
I’d say we both “wear the trousers” in a way. Danny is very much a “man’s man” but I’m also the one with common sense.

13. If i am watching tv, what am i watching?
Hell’s Kitchen or Rupaul’s Drag Race.
Not wrong!
14. What is one food i do not like?
Tomatoes.
Yep! Well raw bits of tomatoes.
15. What drink do i order if we go out for a meal?
Pepsi Max / Vodka and Coke.
Correct!
16. What size are my feet?
5.
Technically true. I range from a 4.5-6.
17. What is my favourite kind of sandwich?
Chicken Mayo and Lettuce.
Correct!

18. What is one talent i have?
Very good at organising things.
Can’t not agree.

19. What is my favourite Cereal?
Porridge.
After Danny said this, I went on to tell him it’s Coco Pops, and he returns with “I have never seen you eat coco pops in my LIFE”. I only eat them every weekday, he’s just never here to see!
20. Where was our first kiss?
In my house, on our first date.
Technically it was at the bus stop when he walked me there to go home afterwards. But he’s right I guess!

21. What colour are my eyes?
Hazel…NO WAIT…Grey-Green-Blue Eyes.
I can’t believe he said hazel, but yeah my eyes are Grey-Green. Mostly look Blue sometimes.

22. Who is my best friend?
Me obviously.
Yeah like ha ha what friends?
23. What is something you do that i wish you wouldnt do?
Spending money when I don’t need to.
We’re both bad with money, just he’s worse..

24. What kind of cake would you bake me on my birthday?
A sponge cake with icing and no jam
Yum!
25. What can i spend hours doing?
“Stationery” stuff or sleeping.
I love to sleep. And by stationery stuff I guess he means bullet journalling!
26. If i could live anywhere where would it be?
I don’t know, Ireland probably.
I’d love to live back in Portrush, but I’d also love to live anywhere that’s surrounded by countryside.

0 thoughts on “The Boyfriend Tag!”