So as most of you will know, 2 weeks ago I conquered another procedure. The deadly sigmoidoscopy….*
*I must disclose I go into quite a bit of detail, some may seem TMI (although I try not to) but it is a very “intimate” procedure and requires specific TMI words…
What is a sigmoidoscopy?
A {flexible} sigmoidoscopy is a procedure that is used to look inside the rectum (back passage) and lower part of your large bowel. The camera (sigmoidoscope) is a small, narrow, flexible camera that is inserted inside. 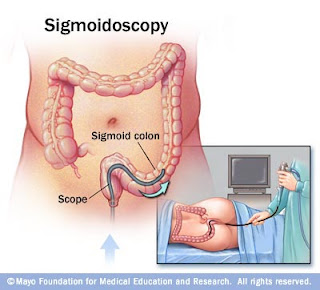 A sigmoidoscopy is often used to identify; haemorrhoids (piles) on the inside, polyps, ulcers, tumours and inflammatory bowel diseases such as Colitis. If a polyp or something is found, they may take a biopsy. If haemorrhoids are found they will do rubber band ligation. This involves suffocating the haemorrhoids, and they will fall out naturally.
Well, how did mine go? Well, let me tell you, I definitely do not want another one.
Isn’t it weird how everything terrible happens to me? At least I try to be optimistic, well I try to with a lot of things, but hospital procedures never seem to go right for me.
First off, I went to Elective Care, the same place were I had my laparoscopy done. I’d say I waited max 20 minutes and was immediately called in to get changed into a gown and the weird shorts. Not even half dressed and they were ready for me. The nurses were all lovely, there were about 5/6 on the team and then the endoscopist. She talked me through the procedure, confirmed everything I told the nurses before I went in, and gave me my oxygen to begin with. Everything was fine up until that bit. I guess I wasn’t scared as I had the laparascopy 2 months before, so I thought this would be a piece of cake..
No chance. I was told I’d be given an anaesthetic to relax me, and I could choose between gas&air or a relaxing agent. I chose the relaxing agent of course, as it came with oxygen and it seemed like the right one at the time. Once given the anaesthetic, I’d say my vision was blurry..ish, well I wear glasses full time so of course taking them off, it was blurry but alot more blurry than usual. I felt fine…exactly as I did when I came in…Strange right? So a few minutes later I feel weird, like I can seriously feel this camera inside me (TMI), and it was seriously uncomfortable. The endoscopist asked the nurse next to me if I was “out of it” (like sleepy as I should of been), the nurse replied “No”. I was 100% aware of where I was, and extremely emotional at that. I said it didn’t matter and for them to continue anyway. Then she hit something and that made me extremely tense, and panic (Just FYI; if you ever need a camera done up the rectum, dont flex or tense.)
So the endoscopist exited as she could tell I really wanted to stop, the pain was unbearable and I could feel my chest getting tighter. She exited and asked if I felt I couldnt breathe. I felt personally okay just my chest was hurting. She said this is normal for an asthmatic. So I was wheeled off to the little discharge room, and laid in bed feeling to be honest, fine. Sore, but I felt like I just walked into a room, had a camera put up somewhere and was told to leave after a few seconds. Then weirdly as soon as I was wheeled into the room, I felt funny, like extremely relaxed. Apparently the relaxing agent I was given, can take a while to kick in (It would be me wouldn’t it?)
So after a bout half an hour, I felt okay, I could walk, get dressed so they sent me to the waiting room to wait for my mum. I had a cup of tea and some biscuits and then finally went home. 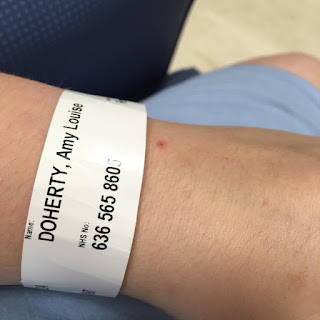 I ate and ate and ate (You have to fast for 24 hours before…) and felt fine. Had a massive headache, chest still hurt and very emotional, but whats different?
The next day was a nightmare. Woke up, feeling really lightheaded…I put it off as “Oh well I was injected with an anaesthetic” It’ll wear off tomorrow. But no this was weird. Everytime I stood up, I fell straight back down, my chest got a lot tighter through the day, and my head was killing. I felt like I was going to be sick. Next minute, there it was. the food I so enjoyed in my mouth again (TMI). I immediately panicked, not helping my already tight chest and started panicking. It also didn’t help the vomit tasted like metal, highlighting blood in the vomit. Hello asthma attack! I rang 111, and was told I’d need to go to A&E. My mum rushed home and we headed there.
After a while of messing about telling me I should just go to a walk in centre, saying I need to be seen to quicker but they were understaffed (Typical NHS), they decided to keep me and see me. After blood tests, wee samples, xrays. They figured I had an allergic reaction the sedative given to me, and were worried that this sedative harmed my lungs (Meaning they were scared of a law suit(: ) After loads of hours I was sent back home, and went straight to bed.
What about now?
Well 2 weeks later and I still feel exactly the same as I did that second day. Headaches, Dizziness, Nausea. But I have nausea constantly anyway but I never really got headaches or dizziness. It even hurts to stare at this computer screen right now but I had to get this written (hello 20% brightness). I went to my GP and he reckons I had an oncoming sinus infection anyway, and a water infection and the sedative just brought out the symptoms anymore. Have been given extremely high doses of codeine, paracetamol and anti-sickness meds (basically stuff that will knock me out.) and antibiotics, but nothings changed, everything is short term as usual.
So here are some tips for those, who may be getting a camera in the future:
1. Be prepared – Take a dressing gown, a magazine and a fizzy drink with you in a bag. Your bag stays with you the whole time and the nurses take it with you to the discharge room. I felt so thirsty and lacked energy after the procedure, I asked my boyfriend to bring me sprite when he picked me up with my mum. It helped!
2. Ask about anaesthetic – Before you go into the procedure, you go into a room with a nurse to discuss you know whats happening, allergies, conditions etc. Ask what anaesthetic they’ll be using. I found out afterwards they could of used another type of relaxing agent which is both pain relief and sedative.
3. Signs – Be aware of the signs of a problem after the procedure. If within 24 hours you feel; lightheaded, extremely nauseated or vomit, sore joints, large amounts of blood in stools or back passage. These are warning signs to get help.
4. Relax – You SHOULD feel fine after 24/48 hours, and they say go back to work after then. But after the procedure, go to bed, put pyjamas on, eat something nice and relax. It can be very stressful and or painful.
I know this seemed extremely morbid and terrifying, but this was my personal experience and had to write about it, as I said I would. Having an allergic reaction after a procedure is a very rare thing, so don’t be worried about that!
If you have any questions, you are welcome to email me at chronicprincess@outlook.com or at my social media, which is linked below!
I also did a “live” update on my facebook page of the trip to A&E (live as in I was writing as everything was happened) so go read that if you wish!
– Amylou
Instagram,Twitter,Facebook Page.