I never got the chance to blog about Wales, as Ive been super busy with preparing for A2 courses, and other things going on in my life.
So at the beginning of August, sadly my boyfriend was admitted into hospital after an asthma attack. It was quite serious, however I am not going to go into more detail. It was suggested that we take a break together. So we decided to go spend a few days in Wales. He travelled with his Nan & Cousin, to their caravan at Ty Gwen on the Tuesday, and my dad dropped me off on the Thursday.
Highlights!
At Tir Prince, there was a fair ground and a market the whole time we were there.
Fairgrounds are one of my phobias, so of course I didnt go on any rides however, I grew up
going to markets so enjoyed the market very much! Even bought a few toys for my niece & nephews
as I grew up wanting toys from markets, it was nice having a piece of someone else in my life, when I was little. 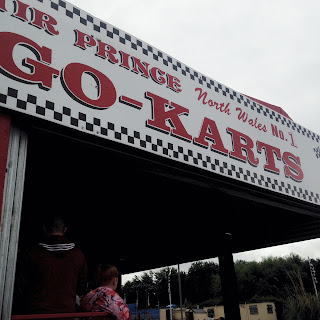 The boys particulary enjoyed the Go-karts, however Tir Prince were quite strict on height restrictions, as Daniel [5’10] had
to get a family kart for William [5′]
Knightley’s was definetly the best fair we went to [even though i hated them]. The atmosphere was so lively and helpful. On one of our last nights, we went and enjoyed
the family shows [Myself, Daniel and William], we looked really cute, as a couple with an 11 year old. But anyway, sadly I was not entertained, the girls who were putting on a disco, did not seem enthusiastic, which showed
when the children were acting up, hitting them, trying to grab their microphone. Also would of helped if one of them, wore appropriate under garments.
However, they did still continue to entertain even with the rain! 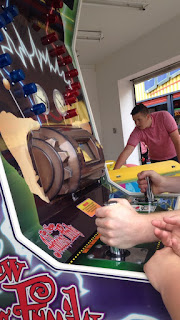 I am not a keen coffee drinker, the smell is lovely but the drink? Ew! Im a cuppa type of girl! Anyway, I never actually realised that Costa do non-coffee drinks [oops], and Daniel wanted me to try one of their ice coolers so bought me their new mango ice cooler. It was nice, would of been nicer if there was no mango sauce in, which made it kind of sickly. Danny was suprised that I enjoyed it, and called me a “typical costa girl” even though Id never go back unless he wanted to. This was also a shock to some friends and family. No no, no starbucks for me! Thankyou! 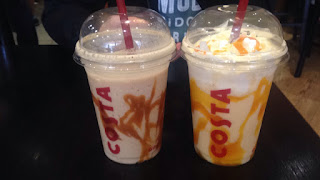 I think that was it? Other than the drinking we mostly did, but thats not really that important!
Dont forget to follow my instagram and twitter:
@floral.kind [instagram]
@ameslou24 [twitter]
* been wanting to keep my blog active, so trying to post about things as much as I can! Comments/Questions wanted! Want to see something? Ask in my contact box!